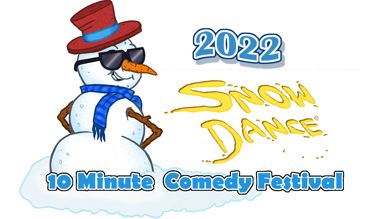 RACINE, WISCONSIN, March 6th, 2022: Over Our Head Players concluded the "2022 Snowdance® 10 Minute Comedy Festival" on Sunday by presenting the audience favorite ‘Best in Snow’ prizes. Over the five-week sold-out Snowdance run, each attendee played judge via their votes. The Best in Snow winning entry was Getting Canned by Meredith Utman of Pittsford, New York, Second place went to Beautiful People In A Living Room Doing Nothing by Alec Seymour of Pittsburg, Pennsylvania, and Third place went to Just A Quick Call by Matt Reichel of Hagaman, New York.

After the final Snowdance performance Sunday, the audience voted for their favorites, just as audiences at each of the previous 24 performances had done. The final show’s tally was added to the votes from throughout the run. Then, the Snowdance ensemble came together for the Closing Ceremonies.

This year’s Snowdance performances were set in the faraway lands West of the Interstate. The cast and crew opened with a musical homage to all of our friends in Racine and Racine County. The traditional announcers, “Chet Thespain” and “Rex Jig,” could not make it this year; they have been away building tiny homes with Jimmy Carter for victims of the movie Ishtar. Standing in were Harry and Gloria, both with last names too crass to print. At the Closing Ceremonies, Harry and Gloria described the action as the cast and crew whirled and danced to represent the return of a live-in-person Snowdance audience. Then came the annual pageantry of the Dance of the Salmon featuring Jeffrey (Joey Lange) waltzing mostly in time with a semi-fresh salmon. Finally, the ceremonial Snowdance snow cone was sealed away for next year’s competition. The company gathered around balloting supervisor Anna Clementi, who opened the sealed mayonnaise jar revealing the winners. Nick Hoyt, who played Fidel Castro in Just A Quick Call, accepted third place. Melissa Hughes Ernest, who played Vitoria, in Beautiful People In A Living Room Doing Nothing accepted second place. Finally, John Adams, who played Dr. Tan, accepted first place for Getting Canned.

The $500 first place Best in Snow award went to Meredith Utman from Pittsford, New York, for Getting Canned which features a married couple (Kristin Althoff and Matt Spect) seeking medical attention after a night of passion, the peculiar doctor (John Adams) reveals they are pregnant much to the delight of the eccentric mother (Tina Paukstelis). Second place was awarded to Alec Seymour of Pittsburgh, Pennsylvania, for Beautiful People In A Living Room Doing Nothing about a couple seeking any sort of excitement in their boring beautiful lives. Third place went to Matt Reichel of Hagaman, New York for Just A Quick Call about an unexplained radar signal that sets three world leaders scrambling to avert global catastrophe. Second place received $200, and the third place award was $100.

Managing Artistic Director Rich Smith reflects on this year’s Snowdance and notes that the foundation is the key to success, "We are so proud to make Racine the home of the 10 minute comedy competition. This year, we were overwhelmed with 546 entries from around the world! That huge response generated great quality scripts for production. Further, we are very lucky to attract talented actors to Snowdance; Snowdance actors embrace the challenge of playing multiple characters, creating a tight ensemble in every sense." Smith continued, "We read every submission anonymously, without knowing the playwright. So, we were very excited when we matched names to finalists and found that we had three hilarious plays from local playwrights. There is no bias toward Racine or Wisconsin playwrights, but maybe there is something in the water making them so funny."

Once the plays and cast are in place, Smith emphasizes how important the final component, the audience, is and how it felt to have them back in the theatre after the pandemic forced a virtual performance last year. "Audiences need this as much as we do. Hearing our community laugh together is priceless after what we have been through the last two years. It is so rewarding to know that our formula still works, and audiences still enjoy what we are doing. We hope to continue enjoying Snowdance for a long time."

The Snowdance Comedy Festival was sponsored by Minuteman Press.

Over Our Head Players operates the Sixth Street Theatre, Downtown Racine. A non-profit organization of volunteer theatrical talent from throughout Southeastern Wisconsin celebrating their 30th season, OOHPs focuses on contemporary comedies and original productions. OOHP will also present Outside Mullingar by John Patrick Shanley in April and May then conclude their season with The Roommate by Jen Silverman in May and June. For information, please email the box office at boxoffice@overourheadplayers.org or call (262) 632-6802. 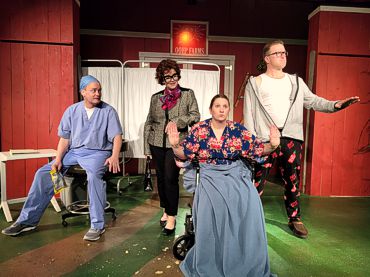 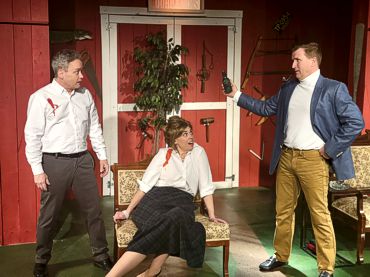 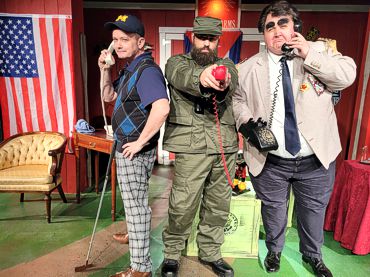