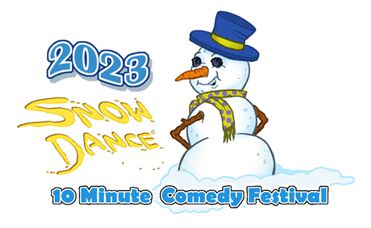 Over Our Head Players has announced the nine finalists selected for performance at the "2023 Snowdance® 10 Minute Comedy Festival." Between July and October, a record-breaking 706 scripts were submitted for consideration. Playwrights from 44 states and 13 foreign countries entered the competition. The largest number of entries came from New York, followed by California. Two of the 2023 finalists competed in previous Snowdance competitions.

The Snowdance selection committee has chosen these nine finalists to further compete in production. These original comedies will be performed together by the OOHP Snowdance® ensemble at Sixth Street Theatre in January and February. At each performance, audience members can vote for their favorite individual comedy; the audience favorites win cash prizes.

Managing Artistic Director Rich Smith describes the submissions, “Every year, Snowdance truly reflects the current trends in playwriting. It is always interesting to see the topics and styles that comprise each year’s entrants. We’ve selected scripts for production that represent the best of contemporary comedy writing.” Sifting through a record number of submissions was time consuming, but the work is just beginning. “We have a terrific ensemble of comedic actors on board for this year’s Snowdance. Once again, we are fortunate to have a mix of Snowdance veterans along with a few talented rookies. The other directors and I cannot wait to start working with them and bringing these new comedies to life on the Sixth Street Theatre stage.”

THE WINNING TITLES AND THEIR AUTHORS:

The Snowdance 10 Minute Comedy Festival is a competition of original 10 minute comedies. In the ultimate interactive experience, the audience can vote for the production they enjoyed the most. The votes will be tallied throughout the five week festival run, and the Snowdance® “Best in Snow” will be awarded after the final performance on February 26. A cash award of $300.00 goes to “Best in Snow”, with a $200.00 award going to second place and $100 to third place. All submissions selected for production receive a one-time $50 royalty payment. OOHP presents Snowdance January 27 – February 26, 2023. Performances are Friday at 8:00, Saturday at 5:30 and 8:00, Sunday at 2:30, and Thursday performances are at 7:00. Tickets are $20.50 on Fridays, Saturdays, and Sundays and $18.50 Thursdays. Tickets are available for purchase at overourheadplayers.org or by contacting the box office at (262) 632-6802.

Over Our Head Players is a non-profit organization of volunteer talent now in their 31st season; they operate the Sixth Street Theatre in Racine. OOHPs has a commitment to original theatre. In addition to the annual Snowdance® competition, previous original works include sold-out productions of Kringle... The Musical, Part 1 and 2, Kringle Karol, Theatre Schmeatre, The Cedar Chest Letters, It’s a Wonderful Lifeboat, Ode to Garlic, Waiting for the Weinermobile™, Big Shoes, Still Haven’t Found..., Real Remembrances of the War in Vietnam, and their 2004 Artwalk performance of Camp Nelson.