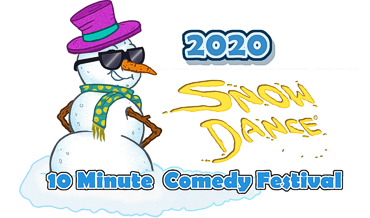 Over Our Head Players is accepting submissions for the "2020 Snowdance® 10 Minute Comedy Festival," now through November 1, 2019. "Snowdance®" entry is open to original 10 minute or shorter comedies for the stage. Winning entries will be performed together in one theatre presentation by the OOHP Snowdance ensemble at Sixth Street Theatre for five weeks beginning January 31, 2020. The entire Snowdance production will be presented 24 times during the run. At each performance, audience members can vote for their favorite individual comedy; the audience favorites will earn cash prizes for the playwright. Entries may be sent to SNOWDANCE, c/o Sixth Street Theatre, 318 Sixth Street, Racine, Wisconsin, 53403. Alternatively, entries may be sent by email to snowdance318@gmail.com.

Rules for the Snowdance Comedy Competition, which is open to everyone without age or geographic restriction, are relatively simple. In summary, competition is open to unpublished, 10 minute or shorter comedies free of royalty and copyright restrictions. Musicals, adaptations, and translations will not be considered. Entries must be postmarked by November 1, 2019. The writer’s name, address, phone number, and e-mail address should be included on the title page and only the title page. The title page should also include a cast list and a one- to three- sentence synopsis of the play. Plays can have a cast of one to five characters; plays should be easily staged, avoiding elaborate set requirements. Submit one typed manuscript in standard format, securely bound. Complete rules are posted on the Rules page. Any questions can be directed to Rich Smith via the box office, at 262-632-6802, or by e-mail at snowdance318@gmail.com. Scripts will not be returned.

The "Snowdance® 10 Minute Comedy Festival" is a competition of original short comedies. Writers from throughout the community, the state, and the country are invited to enter; previous involvement with Over Our Head Players is not a requirement. Scripts will be judged by the Snowdance Selection Committee; selected scripts will be produced in a complete festival performance. Then, in the ultimate interactive experience, audiences vote for the production they enjoyed the most. The votes will be tallied throughout the five weekend festival run, and the Snowdance "Best in Snow" will be awarded after the final performance on March 1, 2020. A $500.00 prize goes to "Best in Snow", with a $200.00 award going to second place, and $100 for third place. OOHP presents Snowdance January 31 – March 1, 2020. OOHP Artistic Director Rich Smith leads the Snowdance ensemble.

Snowdance has grown each year, frequently featuring international finalists. Over Our Head Players Artistic Director Rich Smith has lead the production since it began in 2005, and he has always believed that its unique format is the key reason for the Snowdance festival’s growth. Smith explains, "There are many play festivals and many play competitions, but, as far as we know, Snowdance is the only interactive comedy festival that empowers the audience to vote on the winner! Having the audiences vote makes Snowdance unique for both the audience and the playwrights." He continues, "With Snowdance, no subject is off-limits. We respect our theatre-savvy audience and strive to produce material that is being written for any stage in the country. One of our goals with Snowdance is to bring current comedy from around the world to the shores of Lake Michigan, providing a diverse evening for our audience."

Over Our Head Players is a non-profit organization of volunteer talent from throughout Southeastern Wisconsin and operates the Sixth Street Theatre in Racine. Their 28th season includes Chapatti, KRINGLE... The Musical?, Part II: West of the I Side Story!, Outside Mullingar, and The Roommate. OOHPs has a commitment to original theatre. In addition to Snowdance, previous original works include sold-out productions Kringle... The Musical?, The Cedar Chest Letters, Camp Nelson, It’s a Wonderful Lifeboat, Ode to Garlic, Waiting for the WeinermobileTM, Big Shoes, Still Haven’t Found..., and Real Remembrances of the War in Vietnam.