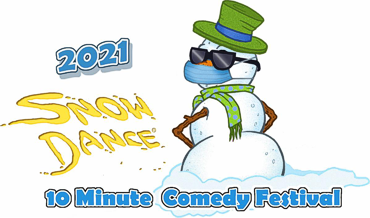 February 19th, 2021 Over Our Head Players presents the “2021 SnowdanceⓇ Ten Minute Comedy Festival.” Snowdance returns for the 17th year, streaming online from February 19th - March 27th, an on demand stream can be purchased for $20 at www.overourheadplayers.org. All previous Snowdance® Festivals played live and in person to sold out audiences.

This year 547 scripts were submitted for consideration from playwrights in 39 states and 10 foreign countries. The Snowdance selection committee chose seven finalists to further compete in production. These original comedies were performed by the OOHP Snowdance® ensemble and recorded by Gary Alvarado with A.V.A Media Services, LLC at Sixth Street Theatre. In addition to the seven finalists, Snowdance will include sketch comedy hijinks with hilarious local humor. A link to a ballot will be included with each purchased on demand stream for audience members to vote for their favorite individual comedy; the votes will be tallied throughout the five week festival run, and the Snowdance® “Best in Snow” will be awarded Sunday, March 28th at 4:30 P.M. on Facebook Live. A cash award of $500.00 goes to “Best in Snow”, with a $200.00 award going to second place and $100 to third place.

THE WINNING TITLES AND THEIR AUTHORS:

FAMILY JUSTICE, James McLindon, Northampton, Massachusetts
This family has a unique way of getting to the bottom of disputes.

DATE WITH DEATH, Steven Hayet, New Brunswick, New Jersey
A woman is uncomfortable saying "no" to a second date, but she has her own way of ending things.

ANNND SCENE (OF THE CRIME), John Busser, Avon, Ohio
A suspect in a murder creates a scene during his interrogation.

THE REAL FLORIDA PROJECT, Nancy Rose Ostinato, Celebration, Florida
A man seeking employment at a job fair finds himself being interviewed for a most unusual position.

Rich Smith, Managing Artistic Director of OOHP and Snowdance, said of the seven selected plays, “It was inspiring to read the outpouring of quality comedy from playwrights everywhere who refuse to let theater or comedy stand still.” He continued, “It's safe to say that this year's entries could have included many, many more for production. We always wish we could do more!” The finalist playwrights span from Florida, Massachusetts, New Jersey, Ohio, Texas, and two from Georgia. “We have the largest ensemble of comedic actors in Snowdance history on board this year.” However, it is not just the actors who made this year’s unique production come together said Rich, “There is so much work that has gone into making Snowdance so successful, it wouldn’t be possible without all the people who dedicate their time to video recording, sound design, editing, and all the other aspects that change when taking our stage show to computer screens”

The 2021 Snowdance on demand video link is available Friday, February 19 at 7:00 P.M. through Saturday, March 27, at 3:30 P.M. All tickets are $20. Visit www.overourheadplayers.org to purchase the streaming show. There are no reserved times, this event cannot sell out. After purchasing access, the Vimeo Video On Demand link is active for 24 hours. Watch any time, day or night, but only for 24 hours after purchase.

Over Our Head Players is a non-profit organization of volunteer talent now in their 29th season; they operate the Sixth Street Theatre in Racine. OOHPs has a commitment to original theatre. In addition to the annual Snowdance® competition, previous original works include sold-out productions of Kringle.....The Musical?, Parts 1 and 2, Theatre/ Schmeatre, The Cedar Chest Letters, It’s a Wonderful Lifeboat, Ode to Garlic, Waiting for the WeinermobileTM, Big Shoes, Still Haven’t Found..., Real Remembrances of the War in Vietnam, and their 2004 Artwalk performance of Camp Nelson.